My book is live on Amazon for purchase!! Never in my wildest dreams would I have ever thought to become an author but here I am. I hope a few of you will take the time to check this book out and get a taste of what it was like for me while I hiked the Appalachian Trail last year from Georgia to Maine! – Sharing is encouraged/appreciated to spread the word!

My blog only covers approximately the first 80 days of my journey. Dive into this book for much more detail, stories and the full 140 day journey!

I’m currently sleeping at the shelter my group intends to walk to tonight, so I’m in no hurry. I slept in until 7:45, which I think is the latest for me on trail. Minisaurous has decided to hike out today as well. I left the shelter around 9 a.m., and it was already over 90 degrees. The temps today are expected to easily push over 100. I walked slower in an attempt to stay cooler and not sweat, but the battle was lost before it even began.

END_OF_DOCUMENT_TOKEN_TO_BE_REPLACED

I never seem to be able to sleep in past 6 a.m., which can be frustrating on a zero day. I’d like to catch up on any lost sleep, but my body always has other plans. For breakfast I took advantage of the kitchen and cooked two loaves of bread worth of French toast and 1.5 pounds of bacon for the group. Mini, being the next one awake, cut up fruit for us as well.

END_OF_DOCUMENT_TOKEN_TO_BE_REPLACED

I left the shelter last this morning, causing me to walk alone for the duration. The good news is we have a civilized place to stay at the end of our day! The rain let up as I set off down the trail, which made things more comfortable but left the rocks slippery and mosquitoes hungry. It’s a quick downhill descent into Palmerton, PA. The climb out of town, however, is not so quick. This climb marks the beginning of the Palmerton Zinc Pile Superfund Site on Blue Mountain. The climb is a steep rocky scramble and is listed as #6 on the top 10 hardest parts of the AT. Below is the view looking northbound on the trail, and yes it’s straight up. 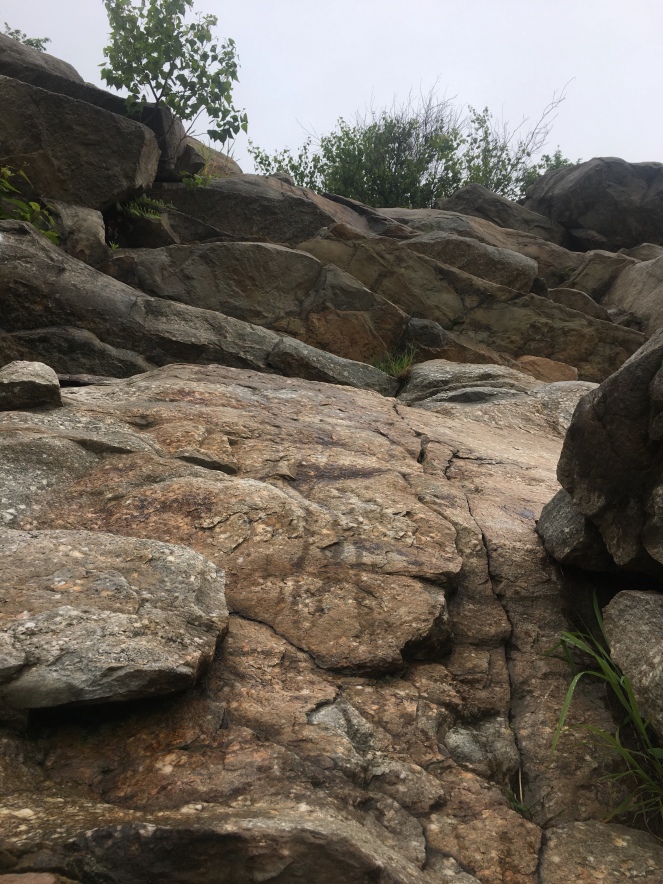 END_OF_DOCUMENT_TOKEN_TO_BE_REPLACED

I slept well for it being a night in the bunkhouse. Craig & Jody served breakfast on the front porch at 7 a.m. It was a spread of French toast casserole, fruit, and sausage and egg bagel sandwiches. Shortly following breakfast, we packed up and got our ride back to the trail. I found my spork sitting on a rock right where I’d left it! I’m thankful to have it back.

END_OF_DOCUMENT_TOKEN_TO_BE_REPLACED

It rained another inch or so last night, which makes it about 3″ this week. We are attempting to push 26 miles from Boiling Springs to Duncannon today. Our first 13 miles were pretty flat and mild roaming through forest and fields. I took my third trail fall in the morning in slow motion after slipping in some mud. I went into the fetal position and rolled into the grass and laid there for awhile. It in no way hurt; it was just a ridiculous affair. Halfway through our day, we passed yet another ATC building but didn’t go inside. We took advantage of the picnic table and the water spigot for a break.

END_OF_DOCUMENT_TOKEN_TO_BE_REPLACED

My body now runs on trail time, so I’m up and ready around 6 when breakfast first starts. I eat my fill, shower, repack, and wait for the others to get ready. They eat around 8 when I’m hungry again, so I joined for second breakfast. We jump back on trail at the park. We’ve been lucky to dodge most of the rain, but today we are expected to get 1/2-1″ this afternoon. A few hundred feet into our hike we crossed the Mason Dixon Line and entered into the Union.

END_OF_DOCUMENT_TOKEN_TO_BE_REPLACED

I’m going to keep my day counter in sync with days hiked rather than the actual date. I left my hike on May 17 when Achilles picked me up and returned home on the 18th. I spent the next week icing my legs and resting. My pain subsided, and the bruise finally started to disappear. I tried a smaller hike in Sioux Falls and felt great, so I booked my flight back.

END_OF_DOCUMENT_TOKEN_TO_BE_REPLACED

I was woken during the night by something stomping around in the leaves outside my tent. It was a nice evening, so I left my rain fly off and was able to see the forest above me through the mesh. I grabbed my light and shined it in the direction of the sounds fully expecting to see my first bear. Thankfully it was just a deer grazing about 2 feet from my tent. He stomped around for the next few hours clearly unscathed by hikers or a sudden burst of light.

END_OF_DOCUMENT_TOKEN_TO_BE_REPLACED

I still don’t feel 100 percent, so I plan to wait out my group instead of hiking out. I said goodbye (more see ya later) to Minnesota and 19 and lugged my now incredibly heavy bag back into the woods. I sat down on a bridge around 10:30 a.m. and caught up my journaling/blogging. I met a few hikers and handed out the food Rocket Man had left me. Snicker Bear and Jackrabbit came off the mountain around 2:30 p.m., so I walked back into town with them.

Snicker Bear’s house (in neighboring Roanoke) is our destination, so she began frantically calling friends to get a ride to her place. We waited at Bojangles and ate. Around 4 they came with a car, and we piled in. Unfortunately, we didn’t all fit, so two trips were necessary. The split allowed us to shower a little faster and get a load of laundry going.

When everyone was clean enough for a night on the town, we headed out. First, we went to Big Licks Brewery where Snicker Bear used to work. It was a really cool spot with mostly outdoor seating on a giant patio of concrete pads and gravel. They have about 40 tables and umbrellas setup as well as a beanbag area. The taco place across the street delivers over here, so we ordered more food with our drinks. Breweries here close around 11, so we walked further downtown to a pizza place called Benny Marconi’s. The slices at this place are massive–over a foot long. Two plates are necessary to keep it off the table. We all enjoyed a slice; Sherlock (below) maybe most of all. 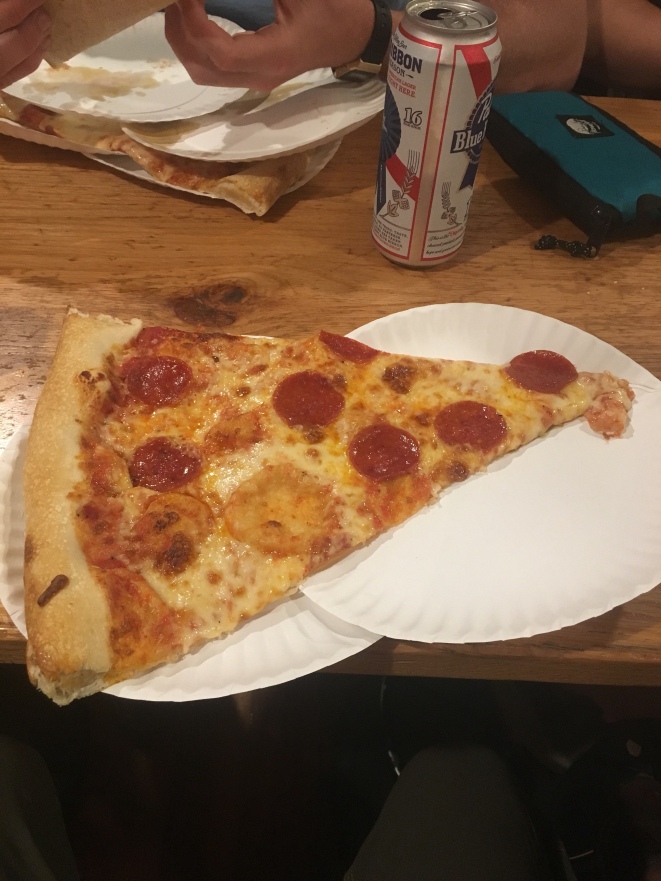 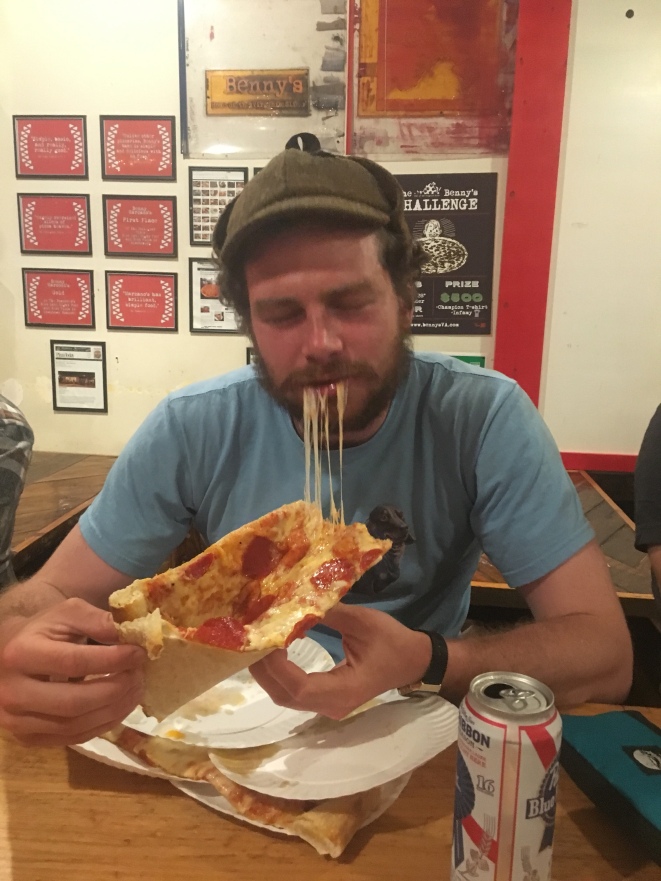 Snicker Bear sings with a band in the area, and they were performing down the street. We headed there to listen to her sing but were all too tired to get to their set and ended up walking home around midnight to end the day.

Our second day in Roanoke was spent mostly laying around. Snicker Bear and Sherlock brought back biscuits for breakfast. Our group split up to go into town to resupply. Snicker Bear, Sherlock, Redcoat, and I walked downtown to Jack Brown’s, a burger place reminiscent of JL Beers back home. The fries aren’t nearly as good, but they have deep fried Oreos to supplement! Following lunch, we went to the outfitter to get a few things for the others. We met the other group after and got the car from them.

We decided to take our friends from across the pond to get an American style milkshake before going to Aldi’s for their resupply. After we stopped at Kroger to get a few ingredients for supper, we headed home. The majority of our night was spent hanging around and watching TV. We did a few episodes of Westworld and some stand up comedians.

I admit our 0 days are not generally that exciting, but it is nice to be a couch potato every once in a while. I would have much preferred to be hiking, but my group has a tendency to indulge in town time. It’s a good balance for me I think, as I’d probably burn myself out if I didn’t have them to keep me here. Tomorrow we hike out but have a shorter day planned with all our extra food weight.

My group packed up slowly today in their post-party state. We did manage to get a picture of the group prior to leaving! Here we are so you have a chance to see everyone.

We ended up leaving Roanoke around 10 a.m. and headed back to Daleville to eat at Cracker Barrel. We realized the mistake a little too late, as it was Mother’s Day, and it was packed. An hour later we finally were seated, and I must say it was worth the wait. So many plates of food had to be brought out to our table that our waitress had to call in four other staff to help carry it out. 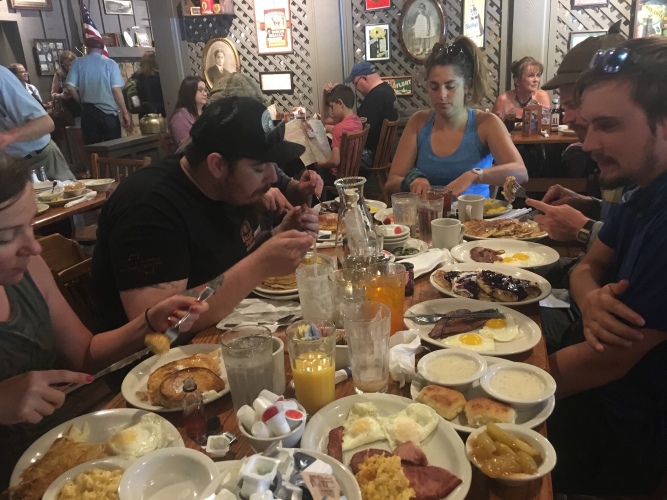 After finishing breakfast we had a mile walk down the interstate back to the trail where we hopped off a few days ago. We have a goal of Wilson Creek Shelter, about 10 miles up the trail. The rest of the group seemed to be stalling waiting around the picnic tables in an effort to digest further. I set off immediately and unfortunately wouldn’t see anyone from the group again.

I hiked slowly due to the heat and heavy humidity that seemed to be stuck over the area. The trail wasn’t a difficult hike and only had a few minor climbs. Rhododendrons are blooming in full force now, and the trail smells wonderful.

I hit the shelter around 5 and noticed I have strayed from my normal bubble of hikers. I recognized a few faces, but many are new after taking so much time off. I’ve been moving slowly the last week or so with some tendinitis creeping into both my right achilles and my left shin. The achilles issue generally stretches itself out after a bit, but I can’t shake the shin cramping. I was hoping the days off would remedy the issue, but they seem to be coming back already.

My Journey on the Appalachian Trail